Callaway wows again with the return of Big Bertha

The sleek appearance and obvious shape improvements deserve a nod of approval, but it isn’t until you get under the hood of this popular golf club that it becomes apparent just how far along Callaway has come in achieving the perfect balance between performance and design. Just a single look at how much has gone into creating the new Big Bertha is enough to make even hard to please golfers wow in amazement – this is most definitely Callaway’s biggest leap into the technology of adjustable drivers. 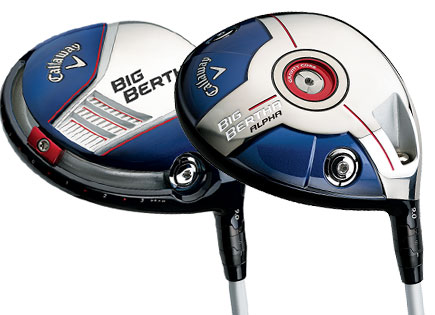 Launching soon will be the Big Bertha drivers – available in regular and Alpha – and both will offer new multimaterial adjustable brilliance.

The drivers are based very much around expanding upon centre of gravity adjustability, offering a sliding weight on the extreme perimeter of the driver and centre of gravity that can be characterised farther back on the face. There is also an increase in MOI on off-centre hits to alleviate those dreaded off-centre shots.

The regular and Alpha drivers have been afforded an eight-way adjustable hosel which will be familiar to those who purchased last summer’s standout golf club, the FT Optiforce driver. The dual-ring design of the hosel allows for loft to be changed to one of four setting (standard loft, minus-one degree, plus-one degree or plus-two degrees) while also allowing for two independent lie angle settings (neutral and draw).

The Big Bertha’s 8-gram sliding weight has been neatly constructed into a five-inch long track at the rear perimeter and according to Alan Hocknell, Callaway's senior vice president of research and development, has the ability to change the horizontal position of centre of gravity by more than 3.5 millimeters and sidespin by 360 rpm

"While loft and shaft flex and weight and total weight are usually addressed as primary elements when players are getting fitted for a driver, certainly in the first level of consideration among the second tier of significant variables is center of gravity position,” said Hocknell when speaking with Golf Digest.

"It's a bit of a new stage for us to launch this into the consumer world, but our testing on players to this point suggests that there are good reasons for each one to be distinct from the other."

The crown is made of Callaway’s propriety forged composit material that’s designed to save on weight, resulting in the driver staying lighter during golf swing.