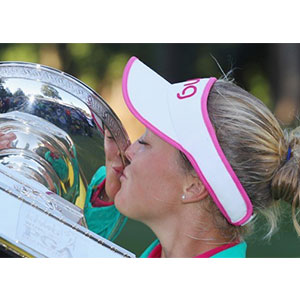 She then shot a bogey-free 67 at Sahalee – and still lost.

Brooke Henderson produced an error-free 65 to overhaul a three-shot deficit on the back nine and then hit a 7-iron from 155 yards to three feet at the first hole of the play-off.

The 18-year-old is just the second Canadian to win a Major, Sandra Post was the first in 1968, and she is now expected to move to No 2 in the world.

She is also the second youngest winner of the Major, Ko is still the youngest after her Evian triumph last year.

Ariya Jutanugarn, who had won her last three starts, produced a 66 but came up one shot shy.

Henderson’s highlight came at the 11th when she rolled in a 90-footer and two more birdies saw her come home in 31.

At the 18th she had to hole a 12-footer for par while Ko missed from four feet at the 17th for birdie. Her week began in spectacular fashion with a hole-in-one on Thursday.

Catriona Matthew tied for 12th while Charley Hull finished with a 68 to claim 16th place.

What Henderson said: ”To think about all of the incredible players that have come before me (from Canada) – I was reading some of the names on this trophy and it’s very, very cool.

“I’m looking forward to the rest of the summer. There’s still three Major championships left. I’d like to get my name on all three of those. But I won’t get ahead of myself here.”