Patrick Cantlay was considered by many as the brightest prospect of the American Walker Cup team, a team that consisted of Jordan Spieth, Peter Uihlein, Patrick Rodgers, Harris English and Russell Henley.

In his first four PGA Tour starts, while still an amateur, the Californian finished inside the top 25 including the 2011 US Open, the one where Rory ran away with it. The week after he shot a 60 at the Travelers.

Cantlay turned pro in 2012, signing with Mark Steinberg, and then won on the Web.com the following March. 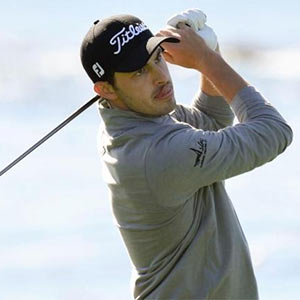 And then he got a stress fracture in his back in the summer while warming up and struggled to find a solution to his problems.

He was told to leave the clubs alone for nine months at the start of 2016 and then in February his best mate and caddy Chris Roth was killed in a hit-and-run incident, Cantlay was walking 10 feet behind him and saw it all.

He did consider returning to UCLA to complete his course having turned pro with two years left of it to run but he is now back and playing on a medical extension. The 24-year-old had nine starts to try and keep his card – and he did it on just his second start with his runners-up finish at the Valspar.

“I try and separate the two, the injury and the personal stuff,” Cantlay said. “The back injury is probably the hardest thing I’ve ever had to deal with. But then my best friend dying far outweighs that. I don’t intertwine the two. I’ve worked really hard to get back to where I am, and I’ve done a lot of good work.”

And he’s back on the PGA Tour where he belongs.