The BMW PGA Championship victor got an early chance to run the rule over the changes at the Surrey layout and was thrilled with the results.

Defending champion Chris Wood has lauded the multi-million pound changes to Wentworth’s West course ahead of the BMW PGA Championship later this month.

The Ryder Cup star was one of the first to experience and play the revamped layout, which has undergone a substantial refit since he lifted the trophy at the Surrey venue 12 months ago. 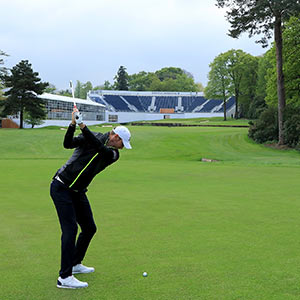 All the greens have been reseeded and re-turfed, with a number also being reconstructed or partially rebuilt. SubAir systems have been installed to help regulate temperature and speed.

Every bunker on the course has been redesigned, and 29 have been taken out in a bid to make the Harry Colt classic a more memorable experience to play and for spectators to watch.

Wood, who finished a shot ahead of Rikard Karlberg last year as he won the European Tour’s flagship event, was impressed with what he saw.

“My first impression was walking onto the first green, looking down and thinking ‘am I on the right golf course?’” he said.

“It is night and day compared to the last few years. We’re three weeks away (from the event) and the greens are absolutely perfect. They are not quite at tournament speed but every putt you hit is so true and the roll is pure.”

Asked about Wentworth’s plans, which had seen work begin just days after he won in a £5 million investment from owners Reignwood Group, Wood quipped: “I thought ‘don’t change it too much’.

“The greens were the priority. I’ve never really minded how tough it’s been tee to green. The bunkers have been severe, but they are a hazard.

“They are much less penal now. I think you will see players being more aggressive. I was looking at some of the bunkers and, at the 3rd for example, if you went in some of the ones on the right last year you were dead.

“It was sand wedge, sand wedge to the green. Now you are looking at it and thinking you could probably get a 7-iron out of there. If you roll into the first half, you can probably get on the green. That’s fair.

“It makes it really playable for weekend players. We are only here one week of the year and there’s so many courses that are built now that are just unplayable for amateurs and I can’t stand that.

“That’s what puts players off playing golf. The crowds that come to watch: surely they want to watch players making birdies? I have never minded 20 under par winning. I’d rather watch that on telly than watch professionals struggle.”

Wood said the changes should also bode well for a return to the days of unpredictable finishes with players now prepared to try and take on the closing holes.

He explained: “I’ve always watched the PGA over the years and players could finish 3-3 or 4-4 and totally change the tournament.

“The last five years I have thought that if you finish 5-5 now, that’s quite good. In the last round, last year, I was 20 yards from the green in two on 17, made 6 and didn’t hit a bad shot.

“16 really needed changing for me and that (green) is comparatively flat now. But there are so many more pin positions and the Tour will probably tuck them in the corners.

“It gives them a bit more variety and a bit more of a chance to tuck them away, rather than have small areas of the green where there is two or three yards to land your ball and you can’t get to all the flags. They are really good changes for me.”

On the 18th, he continued: “There’s a massive stand there behind the 18th and people sit there and want to see players going for that green. They don’t want to see me hit a sand wedge and another sand wedge. A reachable par 5 has got to be reachable with a bit of risk and reward. The balance is much more like it now.”

Asked whether he would now play any holes differently as a result of the changes, Wood said: “At the 3rd, sometimes last year I would hit a 3-wood off the tee to the bunker on the left to keep it short. Now I feel you can be a bit more aggressive with a driver and not worry if you leak it in the right hand bunker.

“The second shot into the 8th is a massive change. We’d be going in there with a wedge but you’d just want to hit the green. If you missed the green right, you were in a bunker and you could hardly keep it on the green and you know left that there’s water.

“Now, the green’s been lowered. It seems bigger and longer, flatter and, to the eye, it looks more appealing for the shot in. It’s less of a fiddly, scary shot and you can be a bit more aggressive.”