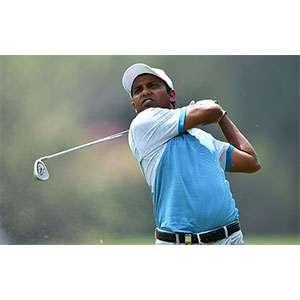 The former caddy now looks like joining Anirban Lahiri at the Olympics after securing a two-shot win over Lahiri and Korean Jeunghun Wang.

He had previously finished second four times in this tournament but this time was different at the Delhi Golf Club, a closing birdie after a brilliant pitch from 70 yards giving him a 71. Lahiri, who applauded his countryman’s shot, could only make a five.

Chawrasia has a nice story to his golfing education – the 37-year-old’s father was a greenkeeper at Royal Calcutta. He then became a caddy and when he joined the pro ranks he had to borrow a set of clubs from a friend when he started competing in 1997.

What Chawrasia said: “I have finished second four times in the Indian Open and every time that happen to me I wondered if I would ever be able to one day be the champion. This year, I came believing I had to win. I knew that I could do it. There was a lot of pressure on me on the last hole but I had to say thank God when Anirban missed his birdie putt!

“I think every Indian player looks at this tournament as the biggest. Also, I think I have now qualified for the Olympics and the World Cup and all of that was going around in my mind when I was playing.”