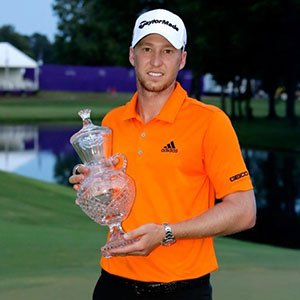 Daniel Berger clinched his first victory with a three-shot win to head to Oakmont full of confidence, as will Phil Mickelson who shared second place with Brooks Koepka and Steve Stricker.

Berger, 23, had three birdies in the last seven holes and the victory moves him from 46th to 29th in the world.

Mickelson, winner of five Majors, has finished runner-up six times at the US Open, the only Major he has not won.

He is looking to become the sixth man to win all four modern big ones after Gene Sarazen, Ben Hogan, Jack Nicklaus, Gary Player and Tiger Woods.

What Berger said: “It’s the greatest feeling. You work so hard to get here and to finally be able to put the trophy up. I’m just thrilled right now.

“I’m just a competitor. I got off to a terrible start today [with a bogey at the first hole] and I just grinded it out and was able to get some putts to fall.”