Daniel Berger made it two wins on the PGA Tour after defending his St Jude Classic title with a bogey-free 66. The 24-year-old, who had a back-up Callaway driver in play after cracking his original one earlier in the week, chipped in brilliantly at the 1st for an unlikely par and he finished the week as the only player in double figures. 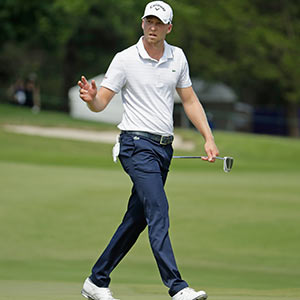 In the back nine he hit a short iron to kick-in distance at the 13th and then boxed a 20-footer two holes later to stay ahead of a packed leaderboard. But maybe his best shot was this below as he escaped from the rough to give himself a chance of another birdie. He missed, as he did at the 72nd hole with a timid effort from 15 feet, but his work was done.

Korean Whee Kim and Charl Schwartzel took second place while Rafa Cabrera Bello could have taken it to extra holes with a brace of birdies to finish but he could only make a pair of pars.

Phil Mickelson, likely to miss this week’s US Open, was ninth while Adam Scott, who will be at Erin Hills, was T10 and maybe one to watch.