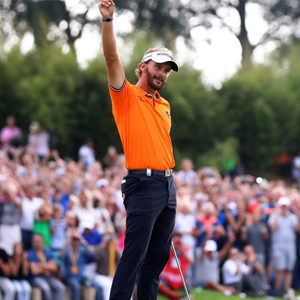 Ten birdies, two bogeys and six pars added up to a 63 and a three-shot victory for Luiten over Bernd Wiesberger. It is Luiten’s fifth win on Tour and his second in his national Open and continues a brilliantly consistent year, the Dutchman also has eight top 10s including two second places.

Wiesberger led after a birdie at the 15th but a bogey at 17 and three late Luiten birdies turned things around..

South Korea’s Ben An was third after matching Wiesberger’s 65, a shot ahead of Alejandro Cañizares, English duo Ben Evans and David Horsey and Australia’s Scott Hend who slipped to a 73.

Andrew Johnston also posted a 65 to secure his second best result of the season while there was not so good news for some of the Ryder Cup side; Lee Westwood (4th) shot a best-of-the-day 63, Matt Fitzpatrick (T7) had a 64 (he opened with a 75 and still finished -10) while defending champion Danny Willett (T12) also fired a 64.

What Luiten said: “The first one was special but this one is very special. It was one of those days where everything I looked at went in the hole. People talk about the zone, and I think I was in it today. I missed one shot when I went in the water on 13 but besides that I didn’t do much wrong. These are the kind of days that make it all worth getting out of bed for.”


Joost Luiten made it a second career home victory at the KLM Open with a magnificent final round of 63 to win by three shots ahead of Bernd Wiesberger.

He relied on a mixed bag of equipment including his reliable M1 driver,Titleist 716 CB irons and a Scotty Cameron prototype putter.

The Dutchman made 10 birdies to clinch his 5th win on Tour, and continues his great form this season where he has had eight top 10 finishes.

What’s in the bag?