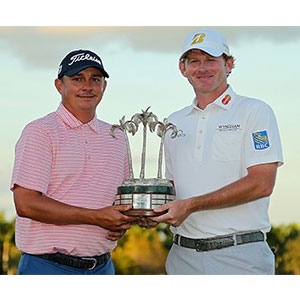 Dufner and Snedeker had six birdies on the front nine, Snedeker chipping in at the 3rd, and followed it with five more to win by two shots, finishing the three rounds at 30 under.

English and Kuchar have finished first, second and second the past three years. Charley Hoffman and PGA Tour Rookie of the Year Daniel Berger finished third in the event which does not carry any FedEx Cup points.

Dufner said: "I'm pretty consistent, I'm in the fairway, I'm on the greens. That gives him a lot of confidence. He putts really well so that gives me more confidence. I was able to stroke the ball a lot freer this week."

Snedeker added: "I play with Jason a lot and this is the best I've ever seen him roll it. The key for us was 17, Jason made a clutch, tough 4-footer down the hill that gave us the lead.”