Dufner comes with a late run at the Memorial Tournament

Jason Dufner produced a brilliant back nine to win the Memorial by three and with it his fifth win on the PGA Tour.

The American had a 77 on Saturday but then stayed on to have dinner with Jordan Spieth, Justin Thomas and Rickie Fowler and he left the course in a better mood than he might have done after having seemingly blown the tournament.

But he then picked up four birdies from the 10th and signed off with a 30-footer for par at the last having driven into rough. His playing partner and dinner companion Fowler was in with a shout but he dropped shots at 14 and 18 to share second with Anirban Lahiri who had a spotless 65. 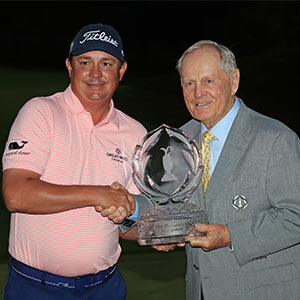 The overnight leader Daniel Summerhays had led by three but he doubled the last for a 78 to drop back into 10th spot.

“Yesterday was not my best day. But I had to get over it quick. It’s a 72-hole tournament, there’s a lot of things that can happen out there. I knew I was still in the mix, said Dufner.

“I’ve always been a fighter, especially since I’ve turned professional. Doing this hasn’t come easy for me. There’s been a lot of struggles and a lot of setbacks. I didn’t come straight out of college and play the PGA Tour. It took me almost 10 years to get out here. Took me another two after that to win and actually get to where I felt comfortable.”