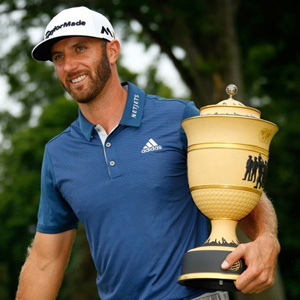 Two weeks after getting the Major monkey off his back Dustin Johnson recorded his third WGC victory.

A second 66 got the job done though it owed much to Jason Day’s late wobbles – the Australian saw his par putt horseshoe out at 15 before making a real mess of the next hole.

After a hooked tee shot he then fired one across the fairway only to get a free drop after his ball was interfered with.

But he failed to take advantage of his good break, finding the hazard before eventually writing down seven.

Up ahead Johnson was making a third birdie of his back nine at 17, the same number as he recorded on the front, before finding some woodwork of his own at the last.

But he kept his head, made bogey and that was good enough as Jason Day and Scott Piercy were unable to close the gap – Piercy did birdie the last to take second spot while Day bogeyed to share third with Jordan Spieth, Matt Kuchar and Kevin Chappell.

This was Johnson’s seventh appearance at Firestone, his previous best was 15th – how things are changing for the big-hitting major champion.

What Johnson said: “I definitely drove it better than I have in years past, and around this golf course it’s very important to drive it well. The fairways are narrow and the rough is deep. The driver was definitely the biggest improvement.

“When I first came on tour, I couldn’t hit a cut to save my life. I feel like my misses, I can get it in the fairway. With the draw, if I missed it, it had zero chance of it going in the fairway. Hitting a cut gives me room for error.”