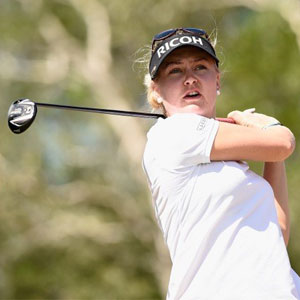 
Charley Hull finished in a tie for second at the Australian Ladies Masters despite making an eagle on her final hole.

Victory in the first Ladies European Tour event of the season went to Australian teenager Su-Hyun Oh who took the title with a final round 69 (-4) for her first professional tour win.

It was only Oh's second professional appearance after making her debut at the Victoria Open.

Speaking after her win, Oh said: "It hasn't really sunk in yet.

"All the pressure of the 18 holes, I didn't really feel it on the golf course when I was playing.

"But on the last green I was thinking 'it's almost over'"

With this win Oh is not required to go through LET Qualifying school and will automatically gain entry to the rest of the seasons events.

Hull, also 18, had led going into the final round but had a mixed afternoon with her eagle at the last taking her to level par for the day.