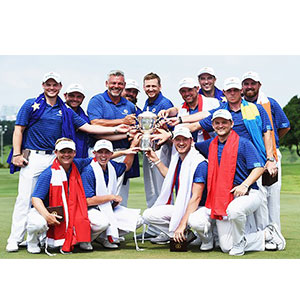 Europe won the second EurAsia Cup (the first was a tie) by a landslide as eight of the Sunday singles were still on the course when Danny Willett secured the winning point.

For the third consecutive day Poulter led Europe out with a winning point (he, Sullivan and Westwood all finished the week with 100 per cent records) before KT Kim and Anirban Lahiri provided the only singles victories for Asia.

Jeung Hun Wang also contributed a half with a birdie putt at the 18th to deny Ross Fisher a third victory.

Chris Wood, Kristoffer Broberg, Victor Dubuisson and Soren Kjeldsen then completed an emphatic week for Darren Clarke’s side with further wins. In the end they won 9.5 of the 12 singles.

Skipper Darren Clarke was quick to heap praise on his players.

“If your players don't play and don't perform then you can be the best captain in the whole world and you're not going to win, so the credit doesn't belong to me, it belongs to the players,” he said.

"The quality of the golf they have played this week has been brilliant."

Asia captain Jeev Milkha Singh said: “I think we need to follow the same process as The European Tour. We've seen it for years now that they are the best team in the world in match play. They start their preparation two years before any team event or a year before I think we need to do exactly the same.”