How Europe lost the Solheim Cup

We break down how the United States retained the Solheim Cup and what went wrong for Annika Sorenstam's European side at Des Moines. Mark Townsend runs down 10 reasons Europe failed to win the Solheim Cup (and America won, obviously).


1. America holed the putts (from everywhere)

‘Whoever putts the best this week will win..’ – it’s an easy generalisation and it gets trotted out in every team competition and plenty of strokeplay tournaments. Things get lost over time and the memory dims of other Solheim Cups but you would be hard pressed to pick a week where one team has holed more putts.

The likes of Kerr, Kang, Creamer, Salas, Lincicome, Piller et al just kept rolling them in and pumping up the crowds and adding yet another birdie to the haul. And these were tricky greens to putt on.

As Annika Sorenstam said on Saturday night: “We had 35 birdies and an eagle and we lost three matches.”

If Friday was Danielle Kang’s day, then Saturday belonged to Cristie Kerr. She became the leading American points scorer, walked in putt after putt, holed a bunker shot for eagle and added a pair of wins.

She has been an ever present since 2002 and, on this evidence, that run will continue at Gleneagles.

This is what Juli Inkster, whose record was eclipsed, had to say about her: “I’ll tell you, there’s not a captain on the European team or the American team that would not want Cristie Kerr on her team. She just gets after it. You just can’t teach heart. You can’t teach guts. You can’t teach willing the ball in the hole. And she has that. And she deserves to be the best Solheim Cup player point-wise.”


3. America had the one true superstar

Lexi Thompson was the only player from the world’s top 10 on stage in Iowa this week.

For the first two days the World No 2 played second fiddle to Kerr, as anyone would have done, but Sunday saw the 22-year-old produce some incredible numbers, even for this week.

Thompson was up against the next player on the world list, the unbeaten Anna Nordqvist. After four holes she was four down, there was a shank at the 2nd, and looked a little teary, so much so that the only way Inkster could show some encouragement was to give her a prolonged hug.

There were also some motivating words as Inkster and Nancy Lopez got the message across – ‘do not be afraid to fail’.

Eight under through seven holes and an incredible half.

“To me that was like six points,” said Inkster.


4. The pod system works a treat

You hear a lot about the pod system which has probably been going on since the beginning of time but really only came to light when Paul Azinger was the 2008 Ryder Cup captain.

And when it works, and you get off to a quick start, it can feel pretty relentless to come up against and gives you some very nice options as captain.

All the American players got out on the first day and there were no new pairings on the Saturday. In total Inkster only employed seven partnerships.

Compare that to Europe who were chasing things from Friday night as well as having the Charley Hull injury to work around. Sorenstam employed 14 different partnerships with only Nordqvist/Hall and Matthew/Icher getting a repeat outing.<.p>

Given Catriona Matthew’s heroics it might be pushing it to say we were weakened by her late addition to the side – the Scot, one of Sorenstam’s vice-captains, stepped in for Suzann Pettersen earlier in the week when the Norwegian had to withdraw with a recurring disc problem.

Then there was Anna Nordqvist who has been laid low with glandular fever in recent times, there was no chance the Swede would be able to complete five outings. To her eternal credit Nordqvist didn’t lose a match.

Europe also had to do without Charley Hull on Saturday whose longstanding wrist injury flared up on Friday morning. It was rumoured that Hull was out of the singles, she did play and actually added a point.

Gutsy stuff from all of them, it was just a shame that Europe didn’t get a clear run at it. 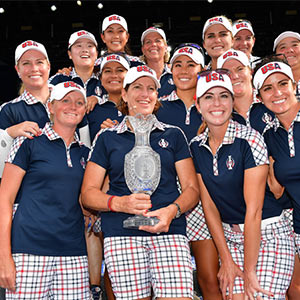 The only session Europe were ordinary in was the Friday fourballs and theygot royally punished for it. Never before had the US completed a session whitewash, which is strange given that Europe have managed it three times before, and to take a three-point lead after one day left a huge mountain to climb.

It also meant that only two Americans went to bed on Friday night without having already made a contribution. Paula Creamer and Austin Ernst made up for that with two wins the following day.


7. But the foursomes was also key

What has tended to happen in recent years is that Europe nibble away some sort of lead in the foursomes. Despite nobody ever playing this format since their amateur days Europe always seem to handle it better.

“I was looking at our fourball and our foursomes and we equally suck at both of them,” said Inkster. “If we could be tied going into Sunday I’d be ecstatic but it never seems to be that way.”

As it turned out America took three and a half points from the foursomes which was a relative success.


8. Home advantage is huge in the Solheim Cup

This was the 15th Solheim Cup and there have been just three away wins in total. In the Ryder Cup the United States haven’t managed it since 1993.

Winning away is hard, very hard. Europe managed it in 2013 by a record margin of eight points which, you suspect, might take decades to better.

Whatever noise the visiting fans make, however strong minded you are as a player and however well prepared you are as a visiting captain you will always be up against it as the away team.


9. Some Europeans were undercooked

More excuses but only playing in a handful of events this year on the Ladies European Tour isn’t the ideal preparation for the pressure cooker surrounds of the Solheim Cup.

It’s been well documented how the LET has lost so many events – it has been reported that the LPGA and men’s European Tours have plans to get involved – but the likes of Georgia Hall and Florentyna Parker have sometimes gone months without playing in anything.

And aside from the competitive side of things the disjointed nature of the home tour can’t have helped with the spirit within the camp.

Hopefully things will be very different by the time Gleneagles rolls round in 2019.

Her name has popped up throughout this and Inkster now has two wins from two stints as captain.

After the fourballs rout this week was made so much easier tactics wise but an ever-present opinion is how Inkster’s players regarded their skipper.

She’s not afraid to flag up weaknesses, she loves to make her players feel good, she’ll let herself go and she’ll do things with dignity. She gets things right and is well loved by her players which is a lovely combination for a leader.

Nobody has captained America three times, you wouldn’t bet against Inkster in Scotland.