Who graduated with top grades and who must do better? Here are the Ryder Cup Europe report cards for Darren Clarke’s men: 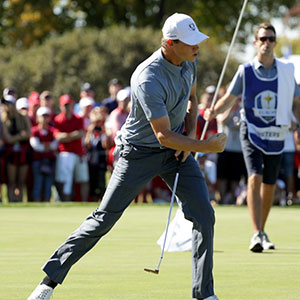 A sensational debut. With the benefit of hindsight, he should have played another game. Conventional wisdom will say that he shouldn’t have been rested on Saturday afternoon but surely a better point is that he should have been alongside Garcia on the opening morning instead of an out-of-sorts Kaymer. Swung the club with style and tempo all week and putted beautifully.

Not a happy debut for Fitzpatrick, who only played nine holes (one foursomes match) before the singles. H actually performed with credit alongside foursomes but it wasn’t enough to earn a point. Put in the anchor slot against Zach Johnson, he was always likely to struggle and that meant he left Hazeltine pointless. He will be back though.

Two points is hardly a fair reflection of what Garcia put in to the week. Sad to say it, but Kaymer’s form was desperate for the first two days and Garcia was alongside him twice. Had much more fun with his compadre Cabrera-Bello. His singles match against Mickelson was easily the game of the day – nine birdies and nine pars was only good enough for a half. Putted bravely even if there were, inevitably, a couple of unpleasant moments to watch on the greens.

Struggled badly for two days before restoring some pride with a late singles win against Kuchar. What a shame for Europe that this was not the Kaymer who has won two Majors and a Players Championship. They badly needed the German’s undoubted class and calmness he brings when at his best. Clarke will reflect that he gave his wild card at least one game too many.

Europe’s No 1 was immense for much of the week, only to falter against Reed after being -5 through the first eight (to be all square). He played the rest of the round in an uncharacteristic +2 to lose the all-important opening singles. His partnership with Thomas Pieters was the highlight of the week for Europe and he has never looked more energised on a golf course.

Quite simply a revelation. Rightly selected for the opening foursomes, the only shame was that his experienced partner, Westwood, did not bring even something approaching his best stuff. Clarke deserves great credit for sticking with the Belgian, whose partnership with McIlroy was magical. Three straight wins later and some thought Pieters might run out of steam in the singles. No chance – JB Holmes was dispatched and he finished the week as the top scorer.

There were such high hopes and expectations for Rose and Stenson. Even more so in this inexperienced team. Rose was typically impressive from tee to green but his putting, which has been an issue for some time, was badly shown up here, especially against the likes of Reed and Spieth. Two out of four in the pairs was a decent effort, but Europe really needed him to take care of his singles against Fowler.

A modest return that doesn’t really do the Swede justice. He and Rose struggled on the greens all weekend. Which must be even harder to bear when you are up against Jordan Spieth four times, as Stenson was. At least he got some revenge in the singles.

Like fellow rookies Wood and Fitzpatrick, a solitary foursomes outing was all the chance Sullivan got before the singles. Like Fitzpatrick, the Nuneaton man failed to register a point, which is terribly sad in the circumstances. Sullivan actually settled down quickly on the first morning but couldn’t quite keep it going. For his sake, let’s hope he gets another chance.

All those great Ryder Cups dating back to 1997 and yet this may well be the way his proud playing career in the event ends. Let’s not dwell on the putting mishaps. He has been a magnificent servant to European golf for 20 years. Losing to Ryan Moore in the singles having been two up with three to play summed up his whole week. He will feel like he has let his great friend Darren Clarke down but he actually played some great golf from tee to green at times.

Not a happy debut for the Masters champion whose form, not altogether surprisingly, has deserted him as the year has gone on. His putting was a real weakness and it didn’t help that his senior partners both struggled at times in his two four ball outings. To cap it all, Koepka gave him a thrashing in the singles. He’ll be back though. Don’t worry about that.

At least the Bristolian has a point to remember his Ryder Cup debut for, which is more than can be said for the likes of Willett, Sullivan and Fitzpatrick. He was excellent alongside Rose in the foursomes and unfortunate to draw Dustin Johnson towards the bottom of the singles. Looked comfortable in this elite company though, which bodes well for the future.