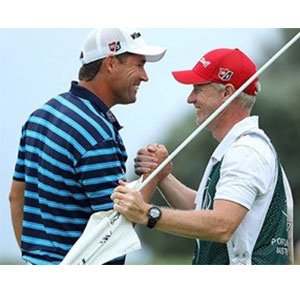 A first win on the European Tour in eight years for Harrington as he pipped defending champion Andy Sullivan by a shot.

The Dubliner’s last win on Tour came at the PGA Championship – he won the Honda Classic in the States last year – and he did it with a closing 65 to finish at 23 under. His aggregate of 261 was the lowest of the season, beating Francesco Molinari in Italy by one.

Harrington was three shots back at one point on Sunday but holed a bunker shot at the 11th to start a run of three birdies in four holes, added another at 17 and got up and down at the last to sneak home.

Anders Hansen, now semi retired, was tied for third alongside Finn Mikko Korhonen who needed a top-25 finish to secure his card. Oli Fisher also retained his card, in his ninth start in 11 weeks, after a 64 moved him up to 100th but Graeme Storm bogeyed the 72nd hole to miss out by €100.

What Harrington said: “I haven’t won yet this year, and I knew the year was nearly done, so it’s always important to get a win every year. It’s a big win, the Portugal Masters is a big tournament. I’ve been coming here for 10 years, so I’ve always liked it down here.

“There’s so many Irish people here. It’s always felt like a home away from home, so it’s really nice to win the tournament. I tried to be really aggressive. The course suited me and I just tried to go after every pin I could, and make birdies. I have a pretty good short game, that was on form this week. No matter where I hit it, I felt like I could get it up and down.”