When Quiros birdied the seventh hole he led by seven, in the end he had to go down two extra holes to beat Zander Lombard to regain his Tour card with his seventh victory.

The Spaniard looked like having to focus on the Challenge Tour in 2017 but he is now back inside the top 250 in the world, he began the week at 703, though he was made to sweat in Sicily.

By the turn the lead was down to four and the back nine was a catalogue of dropped shots with the lead halved to just two when the South African birdied the 13th. 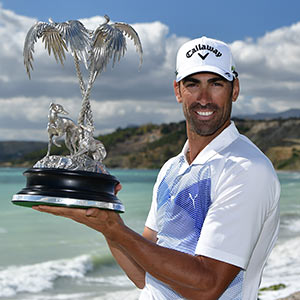 At the 16th Quiros found an unplayable lie off the tee, took six and a bogey at the next meant he had dropped four shots in three holes.

In the end Quiros had to make a 15-footer to make the additional holes where Lombard missed a short one at the second extra hole.

Fellow Spaniard Pep Angles had a chance to make the play-off after chipping in at 17 but then dropped a shot at the last.

Meanwhile Li Haotong took third after making the second albatross of the season, after Prayad Marksaeng at the Indian Open, and surely wins the award for the most understated reaction to pulling off such a ridiculous shot.

“Obviously it shouldn’t be like that but at the end it’s a victory and that’s the most important thing,” Quiros said.

“It’s been a little bit of a mess. The game wasn’t that bad. Just the last few holes I started to struggle with the wind left to right and he was playing nice, Pep was playing nice too. I didn’t have an idea how many shots I was leading by, what I knew on 18 is I have to make a putt to halve with Zander.”