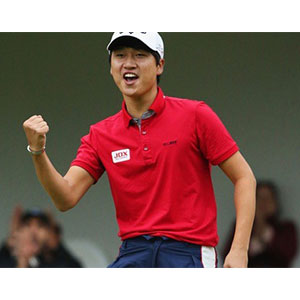 Putts of 18, 50 and 20 feet on the same 18th green gave the Korea’s Jeunghun Wang a remarkable first victory on the European Tour.

His first effort came to barge his way into the play-off with Nacho Elvira. The Spaniard then whistled a brilliant long approach onto the par 5 but Wang rolled in a huge putt to extend it to a second extra hole.

And then converted a relatively more straightforward effort to break through at just 20 years of age. Last week he missed the cut with a pair of 78s though he was second in India.

Overnight leader Chris Hanson double-bogeyed the 8th but still managed a tie for fifth, his best result, while Robert Rock had a chance after making a birdie at the 13th to tie for the lead. But bogeys at 15 and 16 meant he would finish one back with Clement Berardo.

Elvira had one of the rounds of the day, his 69 having looked like being enough in the closing stages.

What Wang said: “I can’t remember the last three holes, I’m so excited right now that I don’t think I’m going to sleep much tonight! It’s an amazing feeling.

"I knew I needed to make birdie after Nacho’s great shot in the play-off, and I hit quite a good shot in there but it was still a long putt. It was a similar putt to the one I holed on the 18th the first time, so I just hit it on the same line and luckily for me it went in.

"My hands were shaking so much, I could barely hold the putter, so I’m amazed the putts went in. I’m so happy.

“Soomin [Lee] is a very good friend of mine. I watched him win and sent him congratulations afterwards. Now I hope he was watching me and will send me congratulations!