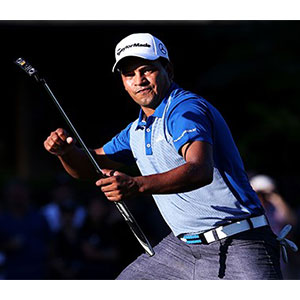 It was a second win for the Argentinian after making seven straight birdies around the turn and then beating Brandt Snedeker in a play-off.

No putt was longer than 12 feet – he then followed it with back-to-back bogeys – but then birdied the closing two holes, the last from off the green, to record a 62 and get to 20 under.

He then produced an 11th birdie of the day to win at the second extra hole.

Snedeker got up and down at the 72nd hole to make the play-off, closing with a 66, but then couldn’t repeat the four, missing from 12 and 10 feet in the extra holes.

Gomez chose to hit a hybrid at the second extra hole, having missed the fairway all week, and it paid off as he found the par 5 in two.

The victory moves him to No. 55 in the world rankings and improves his chances of playing in the Olympics this summer.

Zac Blair nearly joined the play-off with a 3-wood he called the best of his life from 280 yards on the closing hole. He then missed from 10 feet.

What Gomez said: "I felt good all week long and was about to put on a great round. And I had Brandt Snedeker in front of me. I got on a streak with seven putts in a row. And it makes me feel good and feel like I could win the tournament."