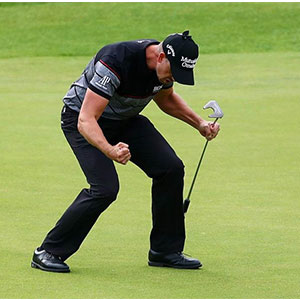 Statistically, it was even better than the Duel in the Sun at Turnberry 39 years ago.

In what must forever be known as the Stenson Open at Troon, here are some of the many numbers and facts behind an unforgettable championship.

Henrik Stenson has become the second man to shoot 63 to win a Major. He matches the achievement of Johnny Miller at Oakmont in 1973.

The Swede made 10 birdies and two bogeys for his closing 63. Mickelson finished three behind after a 66 that contained three birdies, an eagle and no bogeys. At Turnberry in 1977, Tom Watson finished with a 65 and Jack Nicklaus a 66. Watson won by a stroke. Par was 70.

Stenson’s 20-under-par aggregate of 264 is a Major record. The previous lowest score was David Toms’ 265 at Atlanta in the 2001 PGA. The lowest Open aggregate was Greg Norman, whose winning total at Sandwich in 1993 was 267.

It is not however the most under par score in history. That honour belongs to Alex Smith in the 1906 US Open. Playing against a rather generous par of 82, his 295 aggregate was 33 under par. In last year’s PGA, Jason Day also shot -20, albeit against a par of 288.

Hubert Green finished 10 shots behind Jack Nicklaus in 1977 at Turnberry – the famous Duel in the Sun. Watson matched his compatriot’s birdie at the last to end the championship a single stroke ahead. Here, JB Holmes finished 3rd – he was 11 shots behind Mickelson and a massive 14 worse than Stenson. Fourteen shots adrift of Holmes was Ryan Evans, who finished 58th.

Henrik Stenson is 40. He was born in April 1976, some 15 months before the Duel in the Sun at Turnberry. He becomes the first Swedish male to win a Major title. His previous best was runner-up in the 2013 Open at Muirfield… to Phil Mickelson.

The score that played off the last time the Open came to Royal Troon in 2004 was -10 (274). Conditions were significantly kinder that week. This time around, Stenson shot -20 and Mickelson -17.

It was a frustrating week for the Big Four of Jason Day, Dustin Johnson, Jordan Spieth and Rory McIlroy. None really contended in the Stenson Open. None were at their best. Yet when the dust settled, they finished T22, T9, T30 and T5 respectively. Which is still pretty good going.

Much was said about the draw and being on the right or wrong side. Of the early/late camp who had to play in the worst of the weather on Friday afternoon, only Steve Stricker, Rory McIlroy, Patrick Reed, Jason Day and Gary Woodland finished in the top 20.

Fifty players broke par on the first day. By Sunday night, we were down to just 17.

Before what must now be known as the Stenson Open, the lowest final-round score to win the Claret Jug was Greg Norman’s 64 in 1993 at Royal St George’s.

The largest winning margin in a Major remains Tiger Woods’ 15-shot victory at Pebble Beach in the 2000 US Open. He also won the Masters by 12 in 1997. No other golfer has won by 10 shots or more since the 19th century.

British and Irish stars Rory McIlroy, Tyrell Hatton and Andrew Johnston all finished in the top 10. The first two were T5th and the latter 8th.

What Big Three? All three Majors this year to date have been claimed by first-time winners. Shall we add Danny Willett, Dustin Johnson and Stenson and call it a Super Six?

No-one has managed to shoot a 62 in a Major. But Phil Mickelson and Henrik Stenson have now joined the very elite group to post a 63.

There’s no time to relax and recuperate for the elite players after a windswept week on the Ayrshire coast in the Stenson Open. The fourth and final Major of the season is just a week away – the PGA begins at Baltusrol on Thursday July 26.