Faldo impales his hand on a wall-mounted deer 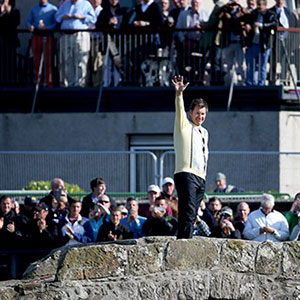 Everybody, save for the wounded party, loves a freak injury tale and this will make it into most top 10s in the years to come.

Sir Nick Faldo’s Open was almost over before it had begun after he impaled his middle finger on the antler of a wall-mounted deer head while taking his shirt off.

The six-time Major winner was all doom and gloom after an opening 81 and his mood wasn’t helped when the wound reopened on Friday morning which meant another visit to the hospital.

But, egged on by his children, he arrived back at the Old Course 45 minutes before his tee time and marched round in a brilliant one-under 71, helped by a three at the Road Hole dressed in his yellow Muirfield sweater.

Faldo hinted that that might be it for the Open but he previously stated that he would play another two.