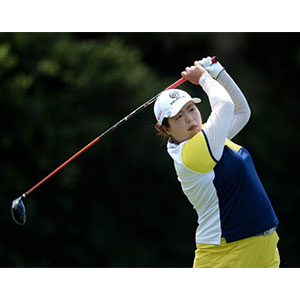 Sharing the lead for the last three rounds, both Choi and Feng carded 67s in testing conditions for a matching 72-hole total of 14-under-par.

Choi led for most of the round until she bogeyed the 18th in regulation play and then again in the play-off.

Feng, who won the 2015 LET Order of Merit, collected her fourth Chinese title which was her sixth LET title and 15th victory as a professional.

What Feng said: “I didn’t expect it. Today, from the beginning, Na Yeon was ahead and I was behind, but I never gave up. When we had two holes left I thought, ‘I’m just going to try my best and see what happens,’ and I think I had luck on my side.

I’m really happy to finish with a birdie on the last hole and I’m really proud that I was able to defend my title.”

Beth Allen of the United States, finished six shots further back in outright third position to return to the top of the LET Order of Merit.

Becky Morgan from Wales finished in fourth place on seven-under-par, while the 2015 Sanya Ladies Open champion Xiyu Lin shared fifth with England’s Georgia Hall, who equalled her career best finish on the LET.