Five years later Stanley's back in the winner’s circle

Another week on the PGA Tour and another play-off. Charles Howell III and Kyle Stanley replayed the 18th hole at the Quicken Loans National and it was Stanley who came through with an exquisite up-and-down for a winning par.

For Howell it was his 293rd start since his last win, a play-off success over Phil Mickelson in 2007, while Stanley’s lone victory came at the Waste Management in 2012. Playing together in ‘normal time’ they both put together 66s with Howell almost holing a birdie putt at the 72nd hole to win it outright.

In extra time Stanley hit his drive so wide it was fine and he was able to find the back fringe. Howell found the first cut but a pushed approach and slightly mishit chip meant that he left himself a 12-foot par putt which slipped by. 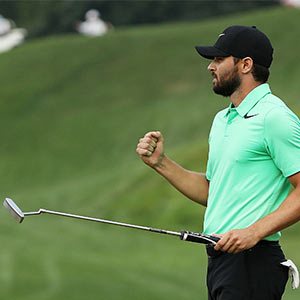 Stanley played a brilliant chip from some very awkward rough and knocked in the four-footer and he is now off to Augusta for just the second time as well as Royal Birkdale in three weeks.

Rickie Fowler had quite the final day with nine birdies, with five of them on the back nine, but he was left to rue a double at the short par-4 14th where he would have hoped to pick up a birdie. He ended in a tie for third with Scotland’s Martin Laird who had a remarkable birdie at the 14th after chipping out sideways and then pitching in for a three.

Laird then, after a brief rain delay, fatted his approach to the last for a bogey but he is now exempt for the Open at Birkdale as is Sung Kang, Stanley and Howell. Kang had a strange end to his round when he got soaked attempting his birdie putt at the 16th – he hadn’t packed any waterproofs or umbrella – and then doubled the next. Let’s hope he packs a bit smarter for Southport.

The final pairing of David Lingmerth (73), the leader for the first three days, and Daniel Summerhays (74) both had days to quickly forget.