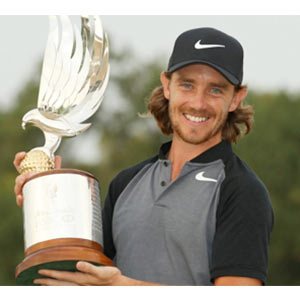 Tommy Fleetwood’s first and last win came at the Johnnie Walker at Gleneagles in 2013, since then it has been a mixed bag with a particularly tough run of driver yips and putting concerns.

But now, after a closing 67 in the desert, the Englishman is knocking on the door of the world’s top 50. His record in Abu Dhabi might have been poor but his form wasn’t a big worry, his last six starts have now been 37-22-14-9-3-W, a run which coincides with a return to his former coach Alan Thompson and employing his mate Ian Finnis as his caddy.

The 72nd-hole birdie edged him ahead of Pablo Larrazábal, a former winner here, and US Open champion Dustin Johnson who eagled the 18th to also sign for a 68.

Course specialist Martin Kaymer had looked liked making it four wins in Abu Dhabi also finished with an eagle but will rue two bogeys earlier on the back nine.

The key to Fleetwood’s victory was five threes on the back nine, the first of which was a chip-in eagle at the 10th, and birdies at 16 and 18 pushed him clear of a classy leaderboard.

The 26-year-old now moves top of the early season Race to Dubai Rankings.

What Fleetwood said: “I thought maybe my second win would come sooner to be honest. I had a really hard time from July 2015 to July last year where I really struggled with my game. It’s been an awkward curve and massive comeback.

“I made it up to Ian, who has been caddying for me, who is one of my best mates. We made the switch and not a lot of people thought it would work, and we have proved them all wrong. The only thing left was getting a win, but I kept thinking, ‘you keep knocking on the door, it will come’. I didn’t really think it would be this week. I’ve made the cut here once in five years so it just shows that makes no sense at all.

“On 18 I got a good break. It took me a few drops to get the perfect spot but I just had a go at it. You’ve got to take those chances if you want to win. To be honest, that was easier than the four-foot putt to win in the end.”