Next month Padraig Harrington returns to Royal Birkdale, scene of his second Open triumph, but there was a thought last week that his career might have prematurely ended in bizarre circumstances.

The Irishman was at a clinic when he was hit on the elbow by an amateur taking a practice swing. The result was a WD from the St Jude Classic, ‘just six stitches’ and no competitive golf for the next two weeks.

“Thankfully nothing was broken. I thought it was the end of me playing competitive golf.” 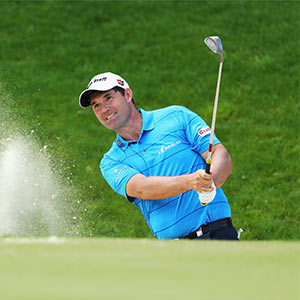 The 45-year-old, who was trying to fix the player’s hook, told the Associated Press: “Barring me fainting from the shock of pain, once I numbed it up, I couldn’t feel anything.

“He caught me on the left elbow – middle of the clubface, middle of the elbow. When I came back from the hospital, I gave him a big hug. It was a pure accident. These things happen. I know he felt bad.”

As for the lesson he added: “He told me I straightened out his hook.”