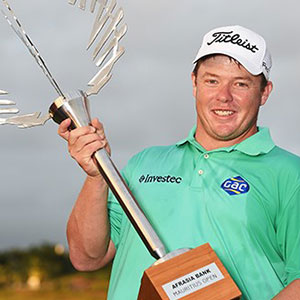 George Coetzee "felt more nervous" during his final 18 holes than the two playoff holes needed to beat Thorbjørn Olesen at the Heritage Golf Club in Mauritius.

After leading for large portions, Olesen had a nervous clubhouse wait to see if Coetzee would force the playoff.

Olesen had been 90 days without competitive golf - due to surgery on a hand injury - but produced a final round 68 (-3) to take to the top of the leaderboard.

Coetzee knew that a birdie on the final hole would take the tournament to a playoff, and made a valiant effort for eagle, only to see his putt come just short.

“I actually felt more nervous during the day [than the play-off] and I’m happy to have pulled through it,” said Coetzee.

“Thorbjørn did unbelievably well to put pressure on me the whole day. I actually had to work to catch him in the end.

“All in all, I’m happy the job is done and it doesn’t matter how many holes it took - I was little upset and angry after my bogey on 16 and when I walked up the tee box, I saw that my name was no longer at the top and I couldn’t believe that Thorbjørn birdied 17.

“I told myself that I needed to give myself a good opportunity on 18 which I did.

“I would have loved to have won it on the first play-off hole with an eagle and do it in style, but I’m obviously happy just to have won."

Coetzee, 28, had started the day one ahead of compatriot Thomas Aiken and Dane Olesen, pulling clear after an excellent start only to have his lead evaporate as Olesen made ground on the leader.

“I’m pretty pleased with the way I handled things today - I had a bad start again and fought my way back," said Olesen.

“It’s disappointing, of course, when you are in a play-off and you don’t win.

“It’s difficult to play that 18th with a three wood, but I’ve been hitting my driver pretty badly so I had to.

“George hit some great shots there in the play-off to get two birdies, as it’s not an easy hole, so big congratulations to him and he’s played really well.

“It was a lot of fighting out there and George just played a little better.

“I didn’t expect this before the tournament so to be in a play-off is unbelievable when I haven’t been in a tournament for three months. I’m very pleased with that and I can take it with me. It’s a good start.”

Earlier in the week Spaniard Javier Colomo recorded the first Albatross on a par-4 in European Tour history.

Colomo, 31, had needed a birdie on his final hole, the 322-yard ninth, to make the halfway cut, and holed his tee shot for a two-under 69.

Colomo said: "I hit an unbelievable driver, very high with a little cut."

This is now the 131st South African victory on the European Tour.