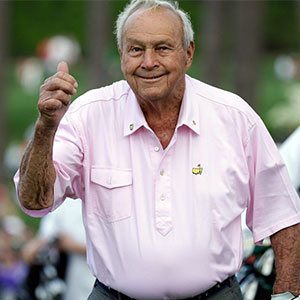 Seven-time Major champion Arnold Palmer has died at the age of 87.

It has been reported that the American golfing great died on Sunday evening at a UPMC Presbyterian Hospital in Pittsburgh from heart complications.

Palmer, also known as The King, won more than 90 professional tournaments in his illustrious career including seven Major championships, most of which were won in the 1960s.

He was one of the most popular and charismatic figures in the game.

Born in Latrobe, Pennsylvania, in 1929, Palmer is heavily credited with helping propel the game worldwide as television was coming of age.

Tributes have poured in on social media for Palmer, including from President Barack Obama and Jack Nicklaus.


Nicklaus, in a statement on his Twitter account, said: “We just lost one of the incredible people in the game of golf and in all sports. My friend – many people’s friend – just wore out. I know he was in Pittsburgh trying to find out how to make himself better. That’s what Arnold has always tried to do. He has always been a fighter and he never gave up on anything. He didn’t give up even now. Maybe his body did , but I know Arnold’s will and spirit did not.”

It was well known that Palmer’s health had deteriorated in recent months. He couldn’t take part in the hitting of the ceremonial first tee shot at this year’s Masters in Augusta, which he normally does alongside Gary Player and Jack Nicklaus.

Palmer, along with Player and Nicklaus, formed the ‘Big Three’ at a time when golf was gaining in popularity across the globe.

Palmer won three of the Major crowns in professional golf – Masters (four times), US Open (once) and The Open (twice) – but the PGA Championship eluded him and he never recorded the Grand Slam.

But there is no doubting his legacy and the huge impact that he made on the game.