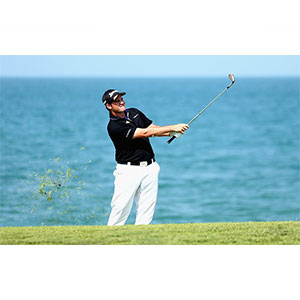 Ricardo Gouveia became the highest earner in a Challenge Tour season, eclipsing Edoardo Molinari in 2009, when he topped off a brilliant season with victory in the final event.

Gouveia came into Oman in top spot and he finished it off with a best-of-the-week 65, with five birdies on the back nine, to beat JB Hansen by shot. It was his second win and 12th top 10 in 18 starts.

As always there was plenty of drama to claim one of the 15 golden tickets to the European Tour. Hansen birdied the last three holes to finish second climb from 17th to fifth place.

Jeff Winther shot 66 to share third and move from 18th to 11th spot. Callum Shinkwin also tied for third and he climbed 10 places from 23rd to 12th while Nacho Elvira, already a European Tour player after three wins on the Challenge Tour this season, finished alongside him on 11 under par.

Brandon Stone was sixth and that was enough for him to take the 14th spot.

Going the other way were Scott Henry of Scotland and Englishman Max Orrin, who both shot 67 to tie for seventh and were inside the top 15 for much of the final day, but came up short.

New Zealander Ryan Fox finished in the unenviable 16th spot, he shot a 66 but came up just €2,350 behind Jamie McLeary in the 15th and final spot.

What Gouveia said: “I got my rhythm back in the middle of the round and my putter was really hot on the back nine.

“It was almost like being on auto-pilot today. I was feeling a little nervous but not too much because I was just in that zone and I just started playing really well and making birdies.