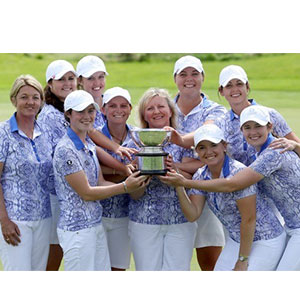 Three of the four transatlantic trophies now rest in Europe after Great Britain and Ireland secured just their eighth victory in 39 meetings in the Curtis Cup.

The surprise success was set up after capturing five of the six points available on Saturday, to set up an 8-4 advantage, but they were still made to sweat by a spirited American side at Dun Laoghaire near Dublin.

The final result was 11.5-8.5 and Bronte Law finished the three days with a perfect 5-0 record, just the second player to contribute such a haul.

The first was Stacy Lewis at St Andrews in 2008, the year the event switched to three days.

The first two points on Sunday went to the Americans but World No 2 Leona Maguire saw off Sierra Brooks 3&2 to complete a personal haul of four points.

World No 9 Olivia Mehaffey then added half a point in the top match against the No 1 in the world and reigning US champion Hannah O’Sullivan.

The Irish teenager actually led going up the last but lipped out from four feet. The scoreline then went to 9.5-6.5 when Andrea Lee beat Alice Hewson by 2 & 1.

But Meghan MacLaren then secured the winning point with a par at the 17th. She had just lost the previous two holes against Bethany Wu but held her nerve.

“That’s a moment I will always remember,” MacLaren said. “I wasn’t sure what was going on at one point but then it became pretty clear how close it was. I was confident Bronte would bring home her point so I just tried to relax and play my own game.”

Law did then close out her match at the 18th against Mika Liu having won the last two holes.

“It’s great to be the first GB & I to win five matches but that wasn’t the priority for me,” Law said. “The priority was to play as well as I could for the team. I think the reason why we have the trophy right now is that we’ve some amazing team chemistry this week. Everyone has got on so well. Our golf has been amazing but the fact we got on so well made it so easy.

“This is the best team I’ve been on and that means more than what I’ve done on a personal basis. There’s friendships here that are going to last a lifetime and that’s the most important thing.”

The 2020 matches will be played at Conwy in North Wales, the third time the Principality will have staged the competition.