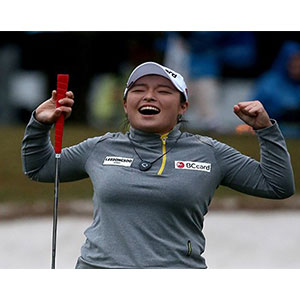 Last week Ha Na Jang holed her tee shot at a par for the first albatross in LPGA Tour history, now she is a winner on Tour. Last year she was runner-up four times.

She had to play 56 holes on the last two days and went into the final round tied for the lead with World No 1 Lydia Ko.

The New Zealander then uncharacteristically went to pieces with five bogeys and a double-bogey in the space of just 10 holes from the 4th but then rattled in a hat-trick of birdies from the 15th to threaten again.

Canadian youngster Brooke Henderson led after a birdie at the 11th but slipped up with two late bogeys and Jang, who was second last year after coming through pre-qualifying, saved her best for the closing holes. Her first birdie came from close range at the 16th and she repeated that at the 72nd hole to get off the mark and win by two.

What Jang said: “It's (the other Korean players’ success) been affecting me the way I play because they're competitors and they're good friends. I've been competing with them for a long time. So watching them winning and then I'm finishing second four times, it's been heartbreaking. I put a lot of pressure on myself, but I worked very hard, so finally I got there and have the win. From now on, I'm going to be able to relax a little bit more, focus more on upcoming tournaments.”