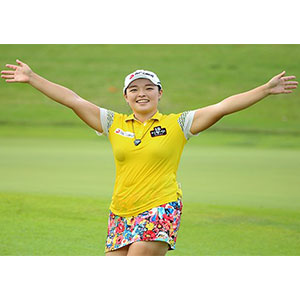 The 23-year-old from South Korea made it two wins in four starts after making eagle at the 72nd hole for a four-shot win over Thailand’s Pornanong Phatlum.

She shot a 65 and then produced her version of Beyonce’s dance at the Super Bowl.

Jang had looked comfortable when she hit a tree attempting to make a recovery at the 11th but a pitch and a putt saved her bogey, her first in 50 holes, and she then rolled in three straight birdies including a 30-footer at 13 and a 50-footer two holes later.

At the par-5 last she led by three and then tugged her 3-wood approach to a front left pin which left a six-foot putt for a three.

Jang has enjoyed an incredible 2016 already, making the first ever albatross when she holed in one in the Bahamas and then, to celebrate her maiden win the following week, performed a Samurai-inspired rendition with her putter on the 18th green.

What Jang said: “Target in 2016 is two wins, but right now, I’m there, so going to change my target from two more wins, so very comfortable right now. No. 18 on the second shot, I just try right side of bunker my target, was a little bit miss.