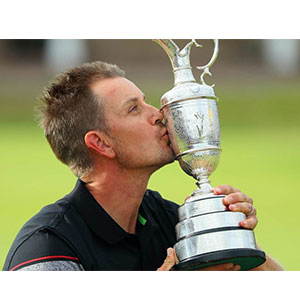 We take a look back at how Henrik Stenson reflected on becoming Sweden’s first male Major champion at Royal Troon.


On securing the Claret Jug

“It hasn’t quite sunk in yet, but I’m very happy. Very proud of the way I played. It was a great match with Phil. It seemed like it was going to be a two-horse race, and it was all the way to the end.

“I knew he wasn’t going to back down at any point, and in a way that makes it easier for myself. I knew I had to keep on pushing, keep on giving myself birdie chances and he wasn’t going to give it to me, so I had to pull away. I’m just delighted I managed to do that with a couple of birdies at the right time on the final stretch.”

“I think the win in Germany I had — the last 15, 18 months I had a lot of great opportunities to win a few of them. I didn’t finish the job the way I wanted and on a few of them it was a couple of youngsters from America did some good stuff and denied me the wins in particular in ’15.

“So the win in Germany at BMW International Open a couple weeks ago was huge to get one over the finish line. You feel the pressure coming in and with not having won for a while, that always kind of builds up. It was great to get that win there. That definitely helped this week, and I felt that extra confidence was going to be huge for me coming into this week.

“I just played some great golf. Yeah, for some reason, I felt like this is my time, and it was.”


On dedicating his win to a friend

“Mike, he was one of the real good guys back in Dubai. I’ve known him for many, many years, and he was a very keen golfer and a great man. I had news on Tuesday — he’s been battling cancer for a long time, but I had news on Tuesday that the end was near, and unfortunately he passed away on Wednesday morning over in the U.S.

“So he’s always been there as a big supporter of mine, and in good days and bad days he’s always sent me messages and been out at some events. This one is dedicated to him, for sure. I felt like he was there with me this week.”


On which shot he felt most under pressure

“Well, the putt on 16 was huge. I mean, Phil missed his eagle putt, so it looked like it was going to go in, and I expect him to make every putt; you have to. And it just snuck by and I’m standing over a five-footer down the hill to keep it to a head. That was a very important putt to make. Then coming up on 17, you know it’s one of the harder holes on the golf course, and I just knew I had to hit a good shot and hit the green and not make worse than three there.

“The way it’s set up, it could have been all done and dusted after my really good 4-iron to, I don’t know, 8, 10 feet and Phil missed it down the bank. But given it’s Phil, of course scrambled a 3 and I nearly missed my birdie putt. But it could have been a more comfy walk coming up 18, if 17 had ended up in a different way. But I considered myself lucky on 16 there.


On his ambition for more Majors

“We’re only just getting started, aren’t we? You never know once you open the floodgates what might happen. Yeah, it’s going to be a while to have all of this sink in. It’s going to be a much busier week next week than I expected. We’ve got a big schedule this summer. It’s PGA in a week’s time and then the Olympics. I was going to have a nice couple of relaxed days back home with the family. We’ll see how well that goes. Got any security personnel I can hire in here? Raise your hand.

"But it’s all good things that will happen. Yeah, of course I’m going to be out there trying my hardest in the week’s time at the PGA in New York."