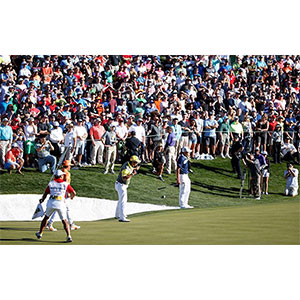 Hideki Matsuyama moved to No 12 in the world after beating Rickie Fowler at the fourth play-off hole of the Waste Management Phoenix Open.

The American found water at the 17th for the second time in the day and Matsuyama was able to make a solid par.

At the second extra hole both players birdied the 18th from around 14 feet, as they had done at the 72nd hole, and then Fowler followed it up with a similar length effort at the next, the 10th, to stay in it. But a pulled 3-wood meant he had to get up and down and, for once, he wasn’t able to.

In ‘normal time’ Fowler looked to have the tournament in his grasp but he got a fast bounce off a downslope at the short par-4 17th and his ball bombed through the back of the green, a total of 360 yards and into water. Matsuyama made that a two-shot swing with his birdie three and then came the start of the 18th-hole heroics.

Matsuyama made one from 18 feet and Fowler followed him in from nearly 10 – both putts were the longest each player made in regulation play on Sunday.

Ireland’s Shane Lowry made a late run with five birdies from the 12th to tie for sixth, which included a pair of birdies at the 16th. This followed up on his top-15 finish at Torrey Pines last week.

What Matsuyama said: “At 18, the 72nd hole, the putt I made there was probably the best putt I have ever made in my life.

“Maybe from the outside it looked calm, but then I was nervous inside. And I played well all day long and so it just carried over into the play-off holes. It was a blast playing in front of all these people. Really. Honestly. It was a dream come true.”