Horsey gallops to Made in Denmark title 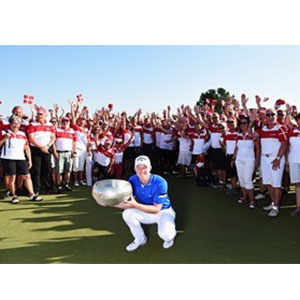 England’s Dave Horsey led from day one after his opening 63 and he finished it off with a two-shot win over Kristoffer Broberg, Soren Kjeldsen, Daniel Gaunt and Terry Pilkadaris.

In the final round Horsey only had one birdie and was caught by Pilkadaris, the first time in 41 holes, but the Australian doubled the 15th to give the Stockport player a two-shot advantage. He then three-putted from eight feet at 16 but parred in.

Sweden’s Broberg broke the course record with a brilliant 62.

It was a fourth European Tour win for Horsey and moves up up to inside the top 60 of the Race to Dubai standings.

He said: "I've been playing well for quite a few months now and not really been getting any results and not scoring particularly well so to come out with a bit more strategy and a bit more focus this week has paid off.

"I've been focusing on myself and not trying to get caught up in the tournament and I managed to do that so well it's nearly a bit of surprise.”