How Nick Faldo fell in love with the Open Championship

Forty-one years ago, in 1976, a young Englishman made his Open Championship debut at Royal Birkdale. The rest, as they say, is history... It was the beginning of a career that spanned five decades and three precious Claret Jugs, fittingly concluding two years ago with a wave to the crowds from the Swilcan Bridge at St Andrews.

The year was 1976 and the venue was Royal Birkdale. At the tender age of 18, Nick Faldo was making his Open debut.

“I remember it well,” said Faldo. “Very much so, because it was my very first Open.

“Back in ‘76 I led the qualifying. And obviously Johnny Miller won, I finished well down, but it was my first Open.” 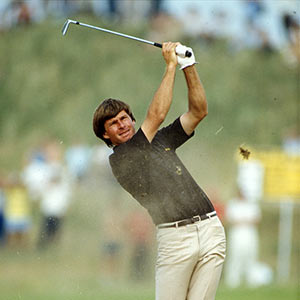 Faldo is being unduly modest. He actually finished the week in a highly respectable tie for 26th. And in the years ahead he would win the Claret Jug three times as well as posting an astonishing 16 further top-20 finishes.

By the time he returned to Birkdale seven years later, it was clear that boy was becoming man in Open Championship terms.

“So that was pretty amazing and then by the turn on the final day I was in the lead. But with nine holes to play I blew up. So ‘83 was part of my learning curve.

“That’s where I then thought, okay, I’m going to rebuild my swing to be a better golfer, ready for the Open, and we all know that story. After another year I took two years out and came out in ‘87.

“But yes, Birkdale in 83 was a key part of my learning curve.”

He eventually finished 8th, as Tom Watson rose to the top and claimed his fifth and final Claret Jug. In 1991, Ian Baker-Finch’s year, he came 17th and was 44th seven years later as Mark O’Meara completed the rare Masters and Open double.

That has proved to be his last appearance at Birkdale in the championship. And even though it never provided him with a Claret Jug, he is highly respectful of the challange it poses.

“I rate Birkdale as a great golf course,” he said.

“Very fair, as you know, flatter fairways, but it’s demanding to hit them.

“That’s the sort of golf you’ve got to believe is going to be required – you’ve got to play really good, solid golf that week on that golf course.”

Right from the beginning, Birkdale makes stringent demands with an opening hole that is surely the toughest on the Open rota – and that’s with due respect to Muirfield.

It’s a right-to-left dogleg where the drive ideally hugs the line of the bunker on the left. The complicating factor is that the wind is off the left – and there is out of bounds uncomfortably close to the right of the fairway. It’s not how you would choose to get your round underway.

“It’s sandwiched between the hills and the green is the same. It’s one of the hardest tee shots, considering there’s no water, in golf.

“Actually the start is really tough when you think about the golf course as a whole – you know, 1, 2, 3, 4, is a serious start.

“Then of course you’ve got the 6th, and 8 and I think 9 is a beautiful hole with its plateau fairway and everything.

“And then there’s the wind – its always seems to blow a crosswind at Birkdale and a couple of elevated tees make it very difficult. The 3rd tee is elevated. The 14th is elevated as well. The 16th can be a brute too when you turn back into a hard wind.”

Faldo celebrates his 60th birthday on the Tuesday of Open week. Tempting though it may be, he insists that he has hit his last competitive shot in the Open.

“I would love to still be able to play like I used to but I’m just really into so many other things now. It’s nice to play but I’m not a ceremonial golfer. I’m not going to go there and chop it round.

“You’re not going to enjoy hitting 77 but 77 might be the best you can do.

“There’s no fun in me going out there and struggling for five hours, I just wouldn’t want to do it.

“I had the most wonderful send-off on the Swilcan Bridge in 2015. I had just birdied 17. I’m in the sunshine. I’ve got my old Pringle, my original Pringle from my ‘87 (Open), and I didn’t realise until I got there that week that that was my 100th major, so I think it all made sense.

“I don’t think I can have a better send off from the Open, ever. So I’m very happy to call it a day playing the Open Championship.”

It is now a quarter of a century since Faldo’s third and last Claret Jug. And even now, the mere mention of it makes Faldo sigh. Of all his six majors, this was the one that took the most out of him.

“Yes, it was, because I had a four-shot lead, everything was going well, and then I frittered it all away.”

Standing on the 15th tee, a four-shot lead at the start of the day had turned into a one-stroke deficit. With three bogeys since the turn, Faldo resolved to play the best four holes of his life.

A drive and 5-iron into three feet set up an unlikely birdie at the 15th, then he got up and down to save par at the short 16th. Faldo finessed a long iron into the heart of the 17th green and duly made a two-putt birdie.

“I had that moment when I looked at the leaderboard on 14th green, I’m now two back.

“So that was going to be my major that I had absolutely blown, and I would have probably been scarred from it somehow.

“I said ‘right, forget the whole week. Forget everything, absolutely everything. You’ve got four holes to play; you’d better play the best four of your life.’ And I just about did. The 5-iron I hit on 15 was one of the best knock-down 5-irons ever, and then obviously a drive and a 4-iron I hit up 17 was absolutely spot on, the best I could do.”

At the last, a 3-iron was fizzed into the early-evening gloom and ran up to the back of the green. Even then, the two-putt par for the Claret Jug was no formality but he cosied a very slippery downhiller to the hole side and tapped in before collapsing into caddie Fanny Sunesson’s arms.

“The 3-iron at 18 probably stands as my best shot ever, because it was a 3-iron with a four to win, and I took the paint right off the flag.

“So really, I just about did it. It’s a nice feeling, to say, wow, I really did hit three or four great iron shots, and one great drive. “I saw the other side of absolutely blowing a major, and I managed to claw it back. So yes, I worked hard for that one.”

Twenty-five years on and it remains the last time an Englishman won the Open.

“Well, yes, as you say, 25 years since an Englishman, but I regard myself as British, as well, and since then Rory has stepped in, and Paul Lawrie too.

“But if we’re talking Englishmen, the time is really positive right now with Justin Rose and Tommy Fleetwood and then Paul Casey. “Maybe this is the time for the 25-year run to end,” he said.