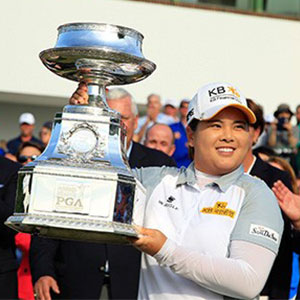 Inbee Park asserted her Major dominance on the Women's PGA Championship with her third win in as many years in at the Westchester Country Club.

Park cruised to a four shot victory after a five-under final round left her atop the leaderboard at 19-under.

With this win, Park usurps teenage sensation Lydia Ko as the World Number One in Women's golf, a place she had vowed to regain in previous months.

"It feels great," Park said. "I feel probably more happy about winning the major championship than probably being No. 1 back again.

"Because No. 1 spot, I had opportunity every week pretty much, and it just happened this week.

"I really just wanted to be No. 1 when I was really ready, and this is like the perfect tournament, perfect timing to go up there, so, yeah, really happy."

The 18-year old Ko was unable to make the weekend, failing to make the cut after opening rounds of 72 and 76 saw her two-over after two days place.

The South Korean has now won five of the last 12 Major and joins Annika Sorenstrom as the only player to win the Women's PGA Championship three times in a row.

"Obviously putting my name alongside like Annika Sorenstam or Patty Berg, legends of golf," commented the now six time Major winner. "Just being a part of history of this golf tournament.

"I feel extremely honored, and I can't believe that I just did it. I mean, it has not really sunk down yet.

"It will probably after I sleep tonight.

"But yeah, this is really a great accomplishment in my career, and obviously there's a lot more things to do from now on but this is definitely one of the greatest accomplishments I've ever had."