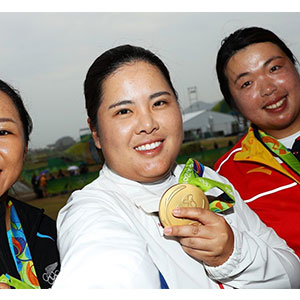 South Korea’s Inbee Park produced a devastating final-round display to take the Olympic gold medal in Rio as England’s Charley Hull missed out on a medal for Team GB.

New Zealand’s Lydia Ko, the World No 1, took the silver with China’s Shanshan Feng in the bronze medal position.

But the World No 5 Park never looked like being caught at the top of the leaderboard as she finished five shots clear on -16 thanks to a final-round 66. A birdie at the last edged Ko ahead of Feng into the silver medal position. Hull eventually finished in a tie for seventh, one ahead of Norway’s Suzann Pettersen.

Park may have already won seven Majors but this may well be her defining moment, her last win came last November and this year has been blighted by thumb problems. In the last two months she had played just one event – and missed the cut.

But her renowned putting stroke was spot on this week, on Saturday she collected another seven birdies. This was her third 66 of the week, otherwise she managed a 70 on Friday when the wind was at its most ruinous.

Ko looked to be out of the medals but produced three birdies in the last five holes, including a clutch birdie at the 72nd hole. Had the putt not gone in she would have played off with Feng who three-putted the last from the fringe. The Chinese star played the last six holes in one over whereas most of the field made progress in the closing holes.

Haru Nomura will also have regrets over missing out on a medal. The Japanese player had a blemish-free 65 to come one shy of Feng, in Wednesday’s opening round she whiffed a back-handed tap-in putt.

Stacy Lewis also came up one short of a bronze play-off, and she will rue seeing so many shots disappear in the gusts of Friday when she shot a 76. The American also came within a whisker of finishing with three straight birdies.

Hull had a memorable Olympics experience, another top 10 in a huge tournament and still at the age of 20. Her team-mate Catriona Matthew was 29th.

The round (and shot) of the day belonged to Russia’s Maria Verchenova who set a new Olympic record with her 9-under 62, a round which came out of nowhere. She also holed-in-one at the 4th.