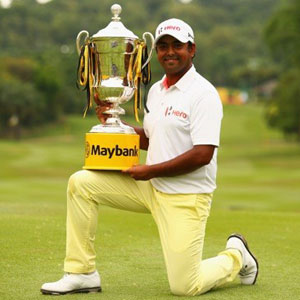 The Indian produced four birdies in his first five holes of his final round to move into a strong position after his sensational 10 under third round 62 put him in contention for his maiden European Tour title.

Austria’s Wiesberger was unable to maintain his early tournament form and slumped to a disappointing two over final round which allow Lahiri to snatch victory by a single shot.

The 27-year old held his nerve at the final hole after finding a bunker but made par to finish four under for the day and take the title on -16.

“I don’t think it’s sunk in just yet,” said Lahiri. “But I’m pretty sure when it hits home it’s going to be a really happy moment for me.

“In hindsight that was one of the most crucial rounds of my career and it’s fantastic when you play well at the right times," Lahiri said of his superb Saturday round of 62.

“I think I’ve got a bad habit of making it hard for myself, but I’m happy I got over the line, as ugly as it was towards the end."

Wiesberger, although denied the title, has had an extremely impressive start to 2015 with top ten finishes in his last four tournaments.

His costly mistake and subsequent double bogey at the 5th was part of an error-strewn round.

“It hasn’t quite finished the way I intended to,” he said.

“After the hiccup on five, I didn’t hit it anywhere near as good as the last 15 rounds. It’s tough to say, but it is what it is and unfortunately I beat myself out of it today.

“I hit a bad lay-up, flew a lot on the downhill lie and my mind wasn’t there; I hit a bad shot and needed to miss it long and take par and get on with it. It’s disappointing.

“I just didn’t trust my swing enough which was good the last couple of weeks. It’s still a good week, and congratulations to Anirban who played a lovely round today. I will try again.”

England's Paul Waring finished tied third alongside early round co-leader Alejandro Cañizares with both players finishing -13 for the tournament.

Defending champion Lee Westwood had lead early on but slipped to a tied fifth position.