Is it time for Rory McIlroy to try a new caddie?

Is it time for Rory McIlroy to try a new caddie?

It was another week of brilliant and infuriating inconsistency for Rory McIlroy at Birkdale. Will this be JP Fitzgerald's last Open as Rory's caddie?

We all know what Rory McIlroy’s caddie, JP Fitzgerald, said to his man on the 6th after that awful start on Thursday.

But even after this welcome intervention you have to question whether it might be worth the admirably loyal McIlroy trying his luck with another bag man.

Time and again in the majors we are seeing McIlroy hurtling up and down leaderboards. He rarely appears to be settled.

If JP can’t keep him a little more level then maybe somebody else can?

Having come into this week on the back of three missed cuts, a top 10 was, realistically, the height of his ambitions.

Rory will no doubt describe it as a good week in the circumstances. But as so often seems to be the case the lingering feeling is ‘what if’. You just know that deep down Rory is cursing his inconsistency and he will know better than anyone else that he is playing with too much emotion. 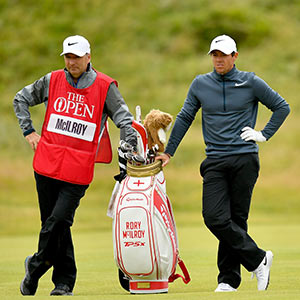 The 28-year-old is nothing if not headstrong. It’s clear that he calls the shots on the course. In the caddie/player dynamic, the received wisdom is that the latter should always have the last word – but there is a balance to be struck.

Take the 10th on Saturday when a 3-iron off the tee found sand and led to a double bogey.

“I took the wrong club on 10 off the tee,” McIlroy said. “You either hit a club that stays short of all those bunkers or you take a club that at least only brings the traps up at 300 into play and I did neither. So that was a really bad club off the tee. And then I got frustrated with that, just about got it out of the bunker and made six.”

If it isn’t the job of McIlroy’s caddie to a) give his man the right club, and b) manage his temperament, then you wonder what is.

It makes you wonder if JP will still be McIlroy’s caddie by the time we get to Carnoustie next summer.