Jordan Spieth is your 2017 Open champion.

But he did it the hard way. Wayward drives, lost balls and clinical putting – Spieth’s maiden Open victory was packed full of drama.

The 2015 Masters and US Open champion’s tense victory at Royal Birkdale means he is the first player since Jack Nicklaus to win three majors before turning 24.

It was a dramatic final day for Spieth and challenger Matt Kuchar that will live long in the memory.

Three-up after 54 holes, Spieth looked like his 2016 Masters demons might come back to haunt him after carding three bogies in the opening four holes to drop level with Kuchar at 8-under. 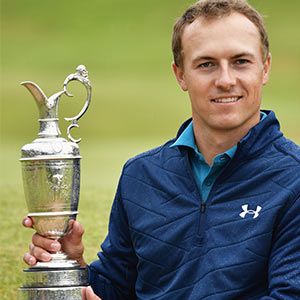 He then fell behind as an erratic drive on the 13th hole saw him take a penalty drop on the range and, to his relief, eventually walk away with a bogie.

But the 23-year-old fought back on the par-3 14th with a jaw-dropping birdie to draw level with Kuchar.

The defining moment of the tournament arrived on the par-5 15th when he holed a long putt for an eagle to go two ahead.

Birdies followed at 16 and 17 as he fought off the stubborn challenge of his Ryder Cup team-mate.