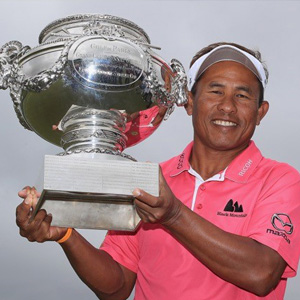 The evergreen 46-year-old went bogey free for 39 holes to win by four shots (he bogeyed the 72nd hole) and claim his eighth title at the 100th Open de France.

The Thai star carded two 68s over the weekend to finish at 11 under with Francesco Molinari second after a pair of closing birdies, Rory McIlroy five back and Rafa Cabrera-Bello in fourth.

Sharing fifth, in a week where double Ryder Cup points were available, were Martin Kaymer, Brandon Stone and Andy Sullivan.

The latter birdied 14, 15 and 16 but then finished bogey-treble-bogey seven at the last, the previous day he holed his approach at the 18th for eagle.

Stone, Alex Noren, Callum Shinkwin and Richard Sterne earned their places at the Open Championship by finishing in the top 12.

But Jaidee was the chief governor in Paris and he now moves up to 9th on the Race to Dubai standings.

The victory also marks the first time that the European Tour has had seven Asian victories in the same season, with the 46-year-old also becoming the oldest winner in the tournament’s, beating 2010 champion Miguel Angel Jiménez by 58 days.

What Jaidee said: “I am very happy this is the biggest win of my career. I’ve been coming here many, many years, and I think especially this week with the centenary edition of the tournament, it’s a special week for me to win on one of the toughest courses we play. Everything is absolutely perfect.

“I’ve been coming here about 10 years, and I think this week the course is set up quite tough. The fairways are quite narrow and the rough is very thick. You have to hit the ball in play all the time, otherwise, if you keep it in play and you hit on the green and you hit a good one putt, you’re going to have a good chance to win the tournament. This week, for me, I had no problems at all. I hit the ball perfect, and kept it in play all the time.”