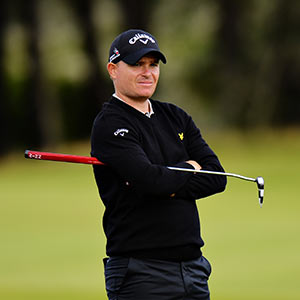 One of the things about golf is that we are all, in the quest to get better and hit it further and straighter, looking for the secret.

But you soon come to appreciate that there is no secret, you do what you do best and stick to it. In trying to hit it better and straighter and further you try all sorts of different things and, before you know it, you are back working in the pro shop.

Look at Rory, Spieth, Dustin Johnson or Day, they haven’t changed their coaches. The top players generally know what they can and can’t do and they don’t try and change that footprint.

Only one player has had more than one rebuild, and been successful, and that is Tiger Woods. Others are off the Tour and can’t break 75.

This summer I had a temporary divorce with my coach of six and a half years, Hugh Marr. We had three months apart and are now, happily, back together again.

We did everything properly when splitting up and parted as friends, we would still go out for dinner at tournaments, as you never want to burn any bridges with anyone.

I won’t name names but some players sack caddies by text or get their management company to sack someone which is pretty pathetic. In our time apart I saw Sean Foley for three months.

He is obviously a very educated and respected coach, and a very motivating person, but what works for Justin Rose didn’t work for me.

It came about as I share the same fitness trainer as Justin and it went from there and so I saw Sean once a month for three days and we were then emailing, texting and FaceTiming to discuss any changes, that was the hard part.

Sean is into a very new age kind of swing, using more squat and dynamic movement and, even though I am fitness strong, that isn’t my footprint for my swing so it didn’t really work and I got away from what I do best.

I had a good chat with my manager and we thought, to make it work, it would mean meeting up six times a year. So that was six more long-haul flights and eating into an already busy schedule, I have a little boy who has just started school so time at home is already precious.

So I am back with Hugh and the phrase ‘you don’t know what you’ve got til it’s gone’ (or whatever it is) springs quickly to mind. He works with me on all parts of my game and has so much control over everything.

He is also like a best friend, confidante and, occasionally, a punch bag. We had one massive barney four years ago with lots of choice words and we were stood in front of the players’ crèche at the time which wasn’t ideal!

He has my interests at heart, if he has a go it’s not because he likes the sound of his own voice, and I trust him with my career and I like the fact that he is on top of me. I’m not really a very technical player. Out of 100 players I would be 15-20th with 100 being the most technical.

I’m pretty natural and do more drill-based practice to get things on the right plane, pretty basic stuff, with more on shot shaping or control of the ball flight rather than anything too in depth.

You do though try and learn off your peers. If I wanted a lesson from a fellow pro I would go to Richard Bland – he has lots of good drills and is pretty good at looking at the swing.

Brett Rumford would give you a mind-blowing lesson, Robert Rock would give you a very good, technical lesson and loves teaching. I play a lot with Chris Wood and David Horsey and you watch how they approach things and try and adapt what they do well and I do badly.

There is no shame in asking players how to play a certain shot. Players are about 50 per cent in being open with advice, some people see it as giving away their secrets.

I have learnt a huge amount from Paul Casey and we played a practice round at Troon this year. He and his caddy were talking about certain things around the green so I asked what they were talking about and he said he’d love to help but it was his secret and that is fair enough.


If you have something a bit different then you would keep it to yourself.