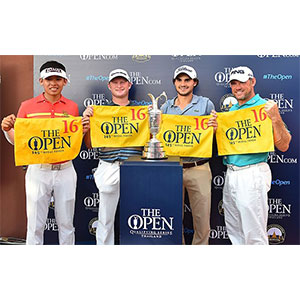 Jamie Donaldson claimed his first win of 2015 and with it booked his place at next year’s Open Championship and the Masters.

The Welshman won by three shots with a closing 65 after starting with a hat-trick of birdies.

And he finished the tournament in style when he knocked in a 35-foot birdie putt at the island 17th, his fourth two of the week there.

The win gets him back inside the world’s top 50, good enough for a return to Augusta, and gave him one of the four spots available for Royal Troon.

Lee Westwood tied with overnight leader Clement Sordet of France to also climb back inside the top 50, just in time for the Masters invite, and he, the Frenchman and 16-year-old Thai player Phachara Khongwatmai, who came through Monday qualifying. will all be at Troon.

It will be Westwood’s 22nd straight appearance at the Open. He shot a bogey-free 67.

“It was important to come here and try and play well and contend and I did that and ended up winning,” Donaldson said.

“That’s what I came here to do. It’s awesome when it all comes off your way.

“Importantly this has enabled me to get into the Open. I needed to win to get into the top 50 so there was a lot to play for and hopefully it all comes to fruition next year.”