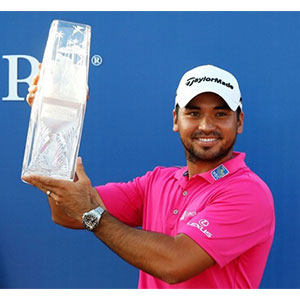 Jason Day secured a wire-to-wire victory at The Players Championship to retain his stranglehold on the world number one position.

After breaking the 36-hole record, Day headed into the weekend on -15 which was the eventual winning score after high wind and lightning fast greens made life tough for the field.

His third round included two double bogeys on the front nine but he came home in two under. His final round also had a tough start with bogeys on 6 and 7 but he steadied the ship with birdies at 10, 12 and 16 for a one-under 71.

No one really mounted a challenge with American Kevin Chappel finish four shots back on -11 with a group on -10 that included former champion Matt Kuchar and fellow Americans Ken Duke, Justin Thomas and Colt Knost.

Despite a 64 on Friday, Rory McIlroy finished in a tie for 12th alongside Adam Scott on -7.

What Day said: "I just had to get in there and try and want it more than anyone else.

"This is great to be The Players champion, but now once tonight is done and tomorrow starts, it's another week that I have to get ready and prepare for the next tournament that's coming up, because it's never enough," he said.

"Winning is never enough, and I've got to try and do it as much as I can before my time is over.”