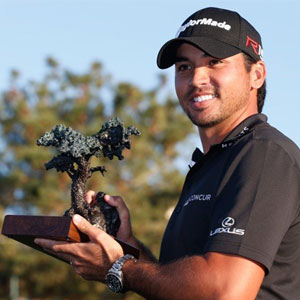 
Jason Day insists he is all set for a big year in the Majors after coming out on top in a four-way play-off at the Farmers Insurance Open at Torrey Pines.

The Australian found an early victory last year when he beat Victor Dubuisson at the WGC-Accenture Matchplay but was hampered by injury and didn’t hit the heights he had expected in 2014.

But after beating J.B Holmes, Harris English and Scott Stallings - who all finished on -9 for the tournament, Day has his sights on the Masters and the World No.1 spot.

“Obviously over the last off season I took three months off to rehab my back, rehab my thumb and it's been a long process and to be able to get out early during the year and win.

“I’m just really thrilled about how it's gotten to happen. So I'm hoping for a good year, hoping to stay healthy and really try and challenge that No. 1.

Day, who rises to number four in the world, thinks the stern test at Torrey Pines will stand him in good stead for the challenges ahead.

“Everyone knows that you just don't get anywhere in life without working hard and putting the dedication in the profession that you love,” he added.

“I feel like I should be winning more, but it's a process and I'm just really happy with how things have started.

“Everything's kind of trending that right direction for the Majors. This played like a US Open style golf course this week and I'm really looking forward to playing Augusta and the US Open.”

Scoring was tough on the South Course during a foggy final day which saw a higher scoring average than the 2008 US Open.

Overnight leader JB Holmes made a bogey on the second play-off hole to hand Day the title after English and defending champion Stallings were both eliminated on the first extra hole.