Jason Day wins the US PGA 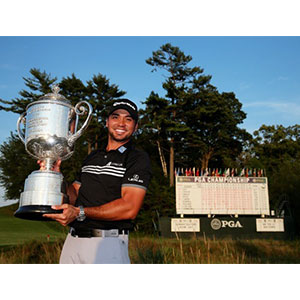 Nobody could deny Jason Day his first Major title, at the 22nd time of asking and just two months after battling with horrific vertigo-type symptoms at Chambers Bay.

Within a few weeks of the US Open he came up just a few inches short of joining the play-off at St Andrews – but this week there were no mistakes, just ruthless efficiency throughout the bag.

His driving was long and aggressive, his course management superb and his putting rock solid, occasionally sensational.

He holed a 50-footer at the 7th to complete a hat-trick of birdies. The Aussie, who also put a stop to an American Slam of Majors, has led or co-led in three straight Majors now and this time it had the perfect ending.

By the 14th he became just the second player, since Tiger at St Andrews in 2000, to reach -20 but, unlike Woods, he remained at the mark which was a first in the game.

Another huge drive and towering iron at the 72nd hole summed up his efforts, the hardest hole on the course throwing up no problems, and, before he could add the closing tap-in to his 67, the tears were already flowing.

Day becomes the first Australian since Steve Elkington to lift the Wanamaker Trophy in 20 years.

For Jordan Spieth this was another monumental effort and he continued to dazzle as he had done since Thursday at Augusta.

The 22-year-old could never get within two of Day and, despite a back nine of 33, the gap was just too much.

The Masters and US Open champion becomes the new World No 1 (while Day jumps to No 3) after a Major year that might never be repeated.

Spieth’s week contained just four bogeys, his five at the 4th his first one in 37 holes, and he closed with a 68 to finish three shots behind.

Branden Grace, fourth at Chambers Bay, picked up where he left off from Saturday’s 64 with four birdies on the front nine. The putts continued to drop from distance but, again, it was one shot that proved extra costly.

At the US Open he drove out of bounds at the 16th, here he went through the back of the 10th green, a hole which was one of the five easiest all week, and a double-bogey six suddenly made a mess of his scorecard.

His playing partner Justin Rose was also left to rue a double, this time at the 13th, after finding a horrible spot in one of the 1000+ bunkers.

The Englishman was beginning to make a genuine move after birdies at 10 and 11 and the putter was behaving better than earlier in the week but, as was the case at Augusta, his excellent play went unrewarded with the grand prize.

And, finally, to Dustin Johnson, the player robbed of a chance to join the play-off here with Bubba Watson and Martin Kaymer in 2010.

Twelve months ago he didn’t play in this Championship after taking a period of ‘voluntary leave’, this week he had a little bit of everything.

Yes he didn’t make the most of another very fast start but, like Day, if you keep getting in position it will happen at some point.

His Sunday was particularly random, opening up with a quadruple-bogey eight and he then walked off the 16th green four under for the day. The 31-year-old signed for a 69 which only included six pars.