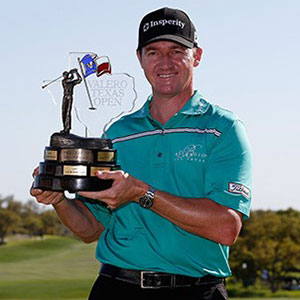 Jimmy Walker breezed to the Valero Texas Open title ahead of fellow Texan, Jordan Spieth and insists he can take his good form and confidence into the Masters.

Walker became the first multiple Tour winner this season, having already won the Sony Open in Hawaii, with 19 winners on this years PGA Tour in 2015.

And it was made all the more special by being on home turf.

"It doesn't happen very often - winning in your home town," Walker said. "The course wasn't giving as much and it was hard to make pars.

"I felt I was leaking a little bit of oil here, wasn't putting very good and then finally smoothed out the putting stroke a little bit and got it back to where it was the past couple of days."

Walker, who snapped a streak of 10 tour third-round leaders that had failed to win, will take practice rounds for the Masters at Augusta National on Monday and Tuesday.

"I like Augusta," Walker said. "All this adds momentum and confidence. It's what we're constantly building toward."

Spieth had an excellent finish to the tournament, with 4 birdies in his last five holes to finish clear second at seven-under par.

"It actually looked like I had a chance," said Spieth, who was seven shots back with eight to play.

"I didn't think that would be possible. You're never out of it in this game, but Jimmy shut that down pretty quickly with his made putts."

"(Spieth) really made me fight hard," Walker said. "He kept hitting it close, and I had to keep making putts.

"I'll be having nightmares about that guy!

With this win Jimmy Walker will move to number 10 and Jordan Spieth will move to fourth in the Official World Golf Rankings.

"That's cool," said Spieth. "But I'm not pinching myself, because there are three guys ahead."