Jordan Smith’s meteoric rise continued at some pace with victory in the European Open in Germany.

The 24-year-old from Bath topped the EuroPro Tour in 2015, the Challenge Tour last year and is now a winner on the main stage after beating the defending champion Alex Levy in a play-off.

The Frenchman had a three-footer to win at the first visit to the 18th but missed and Smith, who had holed from 10 feet at the 72nd hole to force extra time, made another birdie four from short range.

“It’s all a bit surreal. Obviously the Challenge Tour last year and the EuroPro the year before that. It’s been fun,” said Smith who is now up to 18th on the Race to Dubai.

“I had a really good start to the year and the first aim was just to secure my Tour card, which I managed to do. And then the second goal was to win an event, which I’ve managed to do. 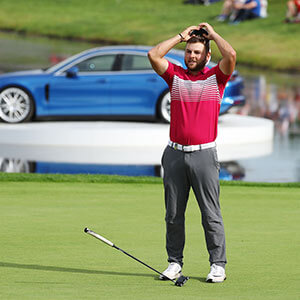 “Once he missed it (on the 18th hole) then I knew we had to start again, regroup, and just go with it. The whole week tee to green is probably the best I have played all year, probably struggled a little bit on the greens, but it came together at the right time.”

As for Levy, who closed with a 69, which included birdies at 15 and 16, to make up two shots on Smith, he was left to rue that missed putt and the prospect of a fifth victory in the last three years.

“I struggled a bit on the putting but I think I played really good golf and I improved my game week after week and that’s really nice,” Levy said.

“I’m really proud of what I did. I shoot three under in the conditions that were really. I think there are a lot of good things coming for me in the next few months.

“My dream was to win this tournament for my birthday present in two days but I didn’t do that. I’m really pleased with what I did and I’m really happy.”

Johan Edfors (70) and Bangladesh’s Siddikur Rahman (68) finished tied for third while it was a huge week for England’s Ashley Chesters who had a top 10 to boost his hopes of a card for next year.