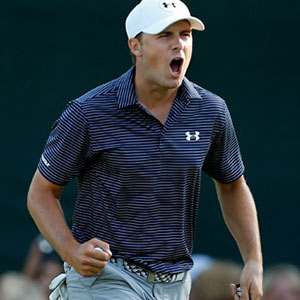 Jordan Spieth has added his name to the growing list of players looking to gun down Rory McIlroy as the world’s number one golfer.

The 21-year-old American sealed his second PGA Tour win at the Valspar after overcoming Ryder Cup teammate Patrick Reed and compatriot Sean O’Hair in a thrilling play-off at Innisbrook, Florida.

It follows on from back-to-back wins at the turn of the year for Spieth who triumphed at Tiger Wood's Hero World Challenge and the Australian Open - winning by 10 shots.

All three finished on 10 under par after overnight leader Ryan Moore faded down the stretch but Spieth found a birdie two on the third play-off hole to clinch the win.

Spieth is now only the fourth player, along with Tiger Woods, Sergio Garcia and Robert Gamez, to have won twice on the PGA Tour before his 22nd birthday but has set his sights on bigger things.

“I like studying the game, I’m a historian of the game,” Spieth said.

“It's really cool to have my name, you know, go along side those. But right now currently and what I'm really focused on is Rory McIlroy is No. 1 in the world. That's who everyone is trying to chase.

“That's our ultimate goal is to eventually, you know, be the best in the world and this is a great, great stepping stone.

“Going into the four Majors of the year to have closed one out in this kind of fashion is going to give me a lot of confidence.”

Henrik Stenson took the clubhouse lead on -9 but Patrick Reed went one better with a 30ft birdie putt on the last. Spieth and O’Hair both parred the last two hole to join Reed in the play-off.

The trio made par on 18 and 16 but Spieth landed the killer blow with a birdie two on the par-3 17th.

Spieth, who lead going into the final round of last year’s Masters, now insists his putting is capable of holding up to pressure.

“That's something that in those wins at the end of last year, Australia, I putted incredibly well on Sunday and proved that to myself that I could do that.

“When I was in contention prior I struggled with those five, six footers or even four footers that I needed or just to make even a 15, 18 footer, just have something go in from a decent range on the back-9 Sunday.

"I'm getting better and better at, grinding over those four, 5-footers and knocking them in the back. Those putting stats have improved significantly. That's why my short game is better.

“I think that if I continue to make those and obviously practice all the shots that I have, then it's only going to bring confidence in the rest of my game.”

Spieth has now risen to number six in the world ranking.