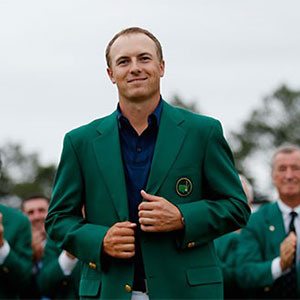 Jordan Spieth showed maturity beyond his years to close out his maiden Major victory, leading from start to finish with records tumbling along the way.

The 21-year-old never really looked like giving the field a chance on a final day which failed to produce the drama many had hoped for.

But Spieth, who claimed the 36 and 54-hole and tied the 72-hole scoring records at the Masters, was not interested in fairytales as he cruised to a well-deserved first Green Jacket.

In truth, the damage was done on days one and two when Spieth followed up his opening 64 with a 66.

But heading into Sunday with a four-shot lead, there were still four Major champions looking to chase down the Texan.

Either Mickelson or Rose had to go low on the front nine to apply some pressure but both could only manage level par for the round by the turn.

Spieth played it in -1 and was always able to keep the chasing pair at arm's length or further.

Even when Phil Mickelson chipped in for eagle on 15 to get within four shots, there was a sense of it being too little, too late.

Similarly for Rose, who put together a hat-trick of birdies on 13, 14 and 15, the holes had simply began to run out.

Rory McIlroy found his form on the back nine to finish -12 for the tournament - a score which would have been enough to win on many years at Augusta National.

Playing partner Tiger Woods - who set the tournament record of -18 - scrambled his way to a level par final round and finished -6. Not bad for a man many feared would miss the halfway cut.

When Spieth rolled in his par-save at 16, moments after Rose had missed his birdie putt, there was a sense that the game was up for the Englishman.

A bogey at the last prevented Spieth taking the new 72-hole record but there was nothing which could take the smile of his face when it sunk in he was a Masters champion.

"This was arguably the greatest day of my life," Spieth said.

"There's a reason I have a hairline like this...it's stressful, what we do on a daily basis.

"But to put on this jacket is incredible. It feels great."